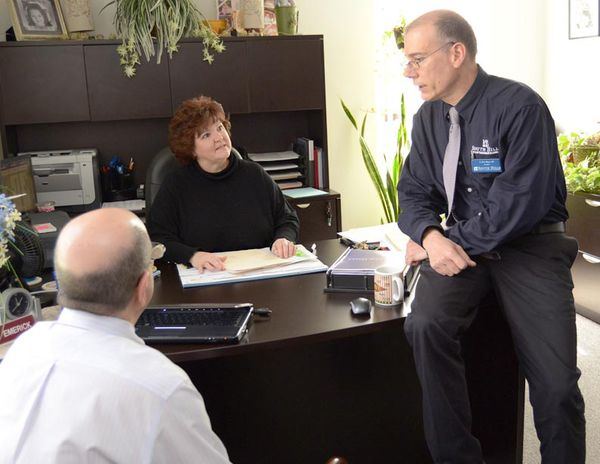 by Walt Frank
The Altoona Mirror

The following article was featured on The Altoona Mirror on April 11, 2016.

S. Paul Mazza III and the personal computer were made for each other.

One day while he was a student at State College Area Junior High School, his father S. Paul Jr. brought home a TRS80 Model 1 personal computer.

“He said to me, ‘I have no idea what it can do, but if you figure it out, it is all yours.’ I had a magical device appear with free reign over it. I can’t estimate how many hours I spent with that computer. That was all it took to put me in my element and set me on my course,” Mazza said.

In the meantime, S. Paul Jr. and his wife, Maralyn, had founded the South Hills Secretarial School on South Allen Street in State College.

Today, S. Paul III is president of the school, which now has locations in State College, Altoona and Lewistown.

His involvement with the school goes back to the early 1980s.

“I was teaching digital electronics in high school and computer classes at the business school by the age of 18, by the time I graduated from high school,” Mazza said.

He also developed the first computerized administration system for the school, which was used for 30 years.

In 1984, Mazza branched out and started Mazza Computer Systems, a company that designed, installed and supported business-grade computer systems throughout central Pennsylvania. During the time that he was running his own computer company, he continued to design, install and maintain the classroom computer labs and the administrative computer systems at South Hills.

“I saw myself as a great entrepreneur who would amass great sums of money and retire early. I learned I loved to devise solutions for people. What a better way to do it,” Mazza said.

In 1996, he moved into the position of vice president of technology at North American Communications, a

regional long-distance telecommunications provider headquartered in Williamsport. In 1998, he moved on to Broadband Network, a manufacturer of conferencing equipment for public schools.

In the spring of 1999, he received a call from the computer department at Penn State.

“They were having trouble finding candidates to support their system. They said they would like someone to train people to be skilled systems administrators. I thought, what if I offered those classes in the business school? It was a perfect fit for our computer major,” Mazza said.

He then introduced a new discipline into the computer curriculum by offering Unix/Linux instruction at the school for the first time.

“From the fall of 1999 to early 2007, I was teaching computer classes at South Hills after a 15-year hiatus. I was teaching on modern equipment. That was a blast, the most rewarding period of my life. There is something about teaching and sharing what you love with others,” Mazza said.

Mazza has been at the school ever since in several different roles.

In the fall of 2015, he was named president of the school – succeeding his mother Maralyn – which has 570 students across its three campuses.

“I am very honored to be able to carry on the mission and keep the focus where it needs to be: on the students. I am proud to be part of what I believe is the best small school in the country,” Mazza said.

Mazza is a good fit for the job.

“He knows the school inside and out. He has the ability to deal with people. He is a good listener, and he takes seriously what people say,” Maralyn Mazza said. “He doesn’t know all of the answers but goes and gets them. He is a kind and gentle person and works hard to solve problems. I see him as being very inspirational.”

“Paul is one of the most thoughtful, kind-hearted intellectuals I’ve ever met. He is a great partner; he is so thoughtful. All the values we share are almost identical, our ethical and moral values and community values, as well,” said Mark Maggs, school director. “He has good visionary skills just like his father. He is visionary and creative and also has analytical skills.”

Mazza said his goal is to educate both parents and students about the value of the school.

“Four-year schools are not right for everyone. The concept of another path of achieving one’s goals is foreign to some kids going through the school system. The two-year associate degree option carries good value. We give them solid marketable skills for high-demand jobs. We focus on training them for high-demand jobs in the communities we serve,” Mazza said.

Beginning with the 2006 Winter Olympic Games, Mazza joined his brother, David, senior vice-president and chief technical officer for NBC Sports Group and NBC Olympics, for a few weeks every other year to help bring the coverage of the Olympics into the Internet age.

He immersed himself in the testing and operations of an online video production system capable of digitizing 48 simultaneous venue feeds, editing this footage into over 3,000 produced pieces and streaming the results to millions of viewers across the country.

“2006 was a real learning experience. We didn’t make any money. There were no ads. We were testing the waters. The summer of 2008 was the big test, the proof of value of Internet delivery of content. We had to prove we could make money on this. It was a little tense, but we made more money than predicted through ad insertions,

all Internet based,” Mazza said.

Mazza has been awarded two Emmys for his contributions to the successful and innovative delivery of record-breaking Olympic coverage spanning five consecutive Games.

Mazza admits he is a family man – he and wife Sue have five children ranging in age from 12 to 25 – and doesn’t take credit for the success of the school.

“The most important piece of my life is my children,” Mazza said. “I am hesitant to take credit for any greatness within the school. The success is due to the faculty who pour their hearts into the students. I am part of the team, but I don’t take credit for getting to where we are.”

Mazza is optimistic about the future of the school.

“Greatness doesn’t equate to size. We are not interested in growing our geographic footprint; we are interested in being the best. We want to grow in excellence, not in size or profitability,” Mazza said. “I hope I will have the strength and health to continue in this role until the good Lord decides to take me home. I have a few years to go before I hang it up.”