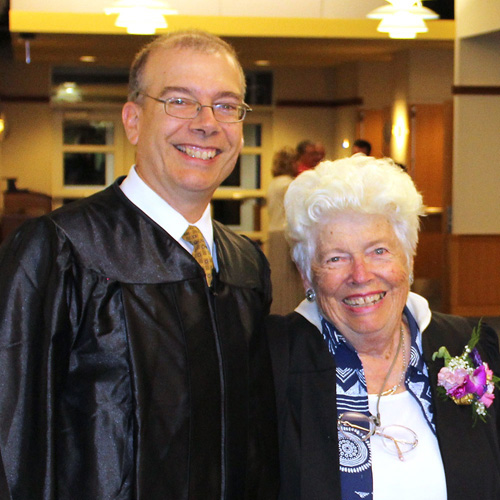 STATE COLLEGE — The South Hills School of Business & Technology has announced the appointment of S. Paul Mazza III as the new school President. The son of the founders of South Hills, S. Paul Jr. and Maralyn J. Mazza, Paul Mazza III has been actively involved in the school since very early in its 45-year history.

Upon appointing Paul Mazza III as the President of South Hills this past fall, Maralyn Mazza expressed great confidence that the original vision that she and her husband had for the school will endure. “The Mazza family will continue to make sure that, at South Hills, the student always comes first.”

The reputation that the South Hills School has in central Pennsylvania owes a great deal to the Mazza family’s dedication to providing the school’s students with the education they need to find meaningful and productive work.

The founder of the South Hills School and President of the school from 1970 until his death in 2013, Maralyn’s husband, S. Paul Mazza Jr., made it a priority to provide training that would allow the graduates of the school to find good jobs.

His vision was that South Hills School would be able to respond to the needs of employers in central Pennsylvania by preparing the school’s graduates for jobs that already existed. Thanks to his son, Paul Mazza III, those graduates were trained to make use of the latest developments in communications and information technology.

As the Director of South Hills for 35 years, Maralyn Mazza worked side by side with her husband to support the faculty and staff at the school so that the students received the best education possible. She and her husband created an atmosphere at South Hills in which all members of the school community were treated with respect and their contributions valued.

Maralyn also encouraged the development of the South Hills internship program, which has functioned for years to “bridge the gap between book learning and reality.” The program allows local employers to become acquainted with students at the school and gives the students a chance to apply their new skills in the workplace, often moving into full-time positions as a result.

Maralyn Mazza retired as the Director of South Hills in 2008 when Mr. Mark Maggs took the position, and she has served in an advisory role ever since.

With the passing of her husband in 2013, Maralyn Mazza became the President of South Hills. Maralyn and Paul’s daughter, Gina Mazza, who had been the Director of Marketing at the school for many years, stepped into the position of Vice-President. Her leadership at this crucial time helped to steady South Hills after the loss of its founder.

Maralyn Mazza held the position of President for over two years, appointing her son, S. Paul Mazza III, as the new President in the fall of 2015.

During his years working at South Hills, Paul Mazza III has worked in many capacities to bring his parents’ vision for the school to life. As teacher, administrator, computer system designer and curriculum developer, Paul has contributed greatly to the reputation that the school has for sending graduates into the workforce with cutting-edge skills.

Since computer skills have become an integral part of every job for which South Hills School of Business & Technology graduates are trained, the school will continue, under Paul Mazza III’s guidance, to implement technological advances in all of the degree programs offered by the school, including business, healthcare, technology, criminal justice, and graphic arts.

As the new President, Paul Mazza III has already begun to work with the faculty and staff to streamline the way in which the degree programs are structured in order to maintain excellence at the school. To continue to meet the needs of the area employers, he has made it a priority to build stronger relationships with the communities served by South Hills.

In addition, he desires to deepen the conversation with prospective students and their parents as to the value of career education and hopes to reach out to more middle-school and high-school students as they make plans for their educational future.

He will also continue to foster the relationship between the employers in the area and the students who receive degrees from the school.

As Mr. Mazza said in an interview in November of 2015, “For 45 years, the graduates of the South Hills School of Business & Technology have taken positions of responsibility in offices and facilities across central Pennsylvania, often serving as mentors in the internship process for more recent graduates. We are committed to maintaining that connection to our surrounding communities and preparing our graduates with the necessary skills to excel in their chosen careers.”

In his involvement in the wider State College community, Paul Mazza III continues to value the importance of education in every facet of life. This is evident in his commitment of time and energy to the Mazza Foundation for Education, a new non-profit organization dedicated to furthering educational opportunities and enhancing the lives of people of all ages.

Recently, Paul Mazza III was approached by a long-time friend with the idea of establishing space in the borough for a community garden on the property once owned by his grandfather, S. Paul Mazza Sr. The permaculture garden has been prepared for the spring of 2016 growing season in co-ordination with Taproot Kitchen, serving as an educational opportunity for special-needs adults in the community.

Outside of his career, Paul is a devoted husband and father of five. His interests include scouting, biking, hiking, skiing and, most importantly, watching his kids grow up.

The staff and faculty of South Hills look forward to working with Paul Mazza III to bring the benefits of career education to the towns surrounding the three campuses in State College, Altoona, and Lewistown.

Maralyn Mazza stated, “We are proud to hand the torch to Paul Mazza III as the new president and are confident that he will maintain the high standards that employers in the area have come to expect from the graduates of the South Hills School of Business & Technology.”

Additional Background: A brief history of Paul Mazza III and his work at South Hills