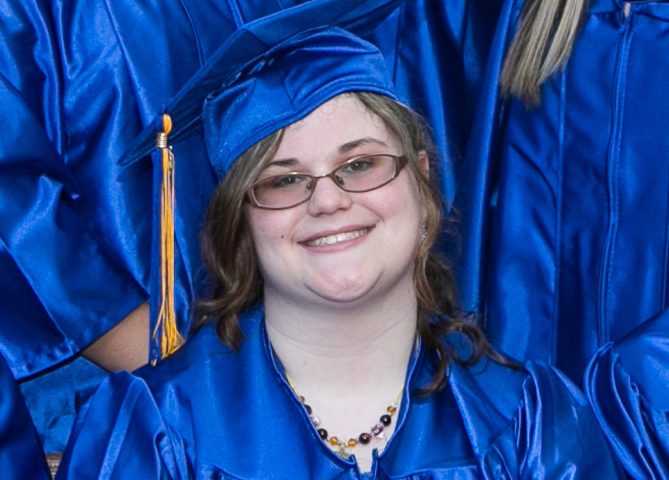 The following article was a “Local” feature on the Centre Daily Times on August 16, 2017.

Words like “bubbly,” positive,” “outgoing” and “kind-hearted,” were just some of what Kari Schlegel’s friends had to say about her.

They also said it’s fitting that an online art exhibit created by people affiliated with South Hills School of Business & Technology was recently named in her memory.

The Bellefonte native and South Hills Class of 2012 graduate died Dec. 15 in a vehicle crash. She was 24.

“In a way, it’s connecting her back into the program,” friend and fellow South Hills graphic design grad Luciano Sormani said. “It was hard to deal with her passing, but with this gallery, it gives me an opportunity to talk about her again, and typical of South Hills — that we can take action even in tragedy, and that’s what makes us part of this family.”

According to a report from school administrators, the Kari Lynn Schlegel Memorial Gallery is part of the school’s website, and features artwork, photography, illustration and design from students, alumni and other members connected with the school.

Now a South Hills graphic design instructor, Sormani said he also submitted work — and some feedback — to help make the gallery be the best it can be.

“It wasn’t my idea, but I really pushed for it,” he said.

Sormani said he met Schlegel while they were studying together in the graphic design program.

“When we first started in graphic arts, we really became friends quickly,” he said. “She didn’t take things too seriously, but her school work. She was always fun to be around and would put a smile on your face. I guess the longer we were in class together, the closer we got. I don’t drive so she would be my driver and in those moments is when she would show her inner self and I got to know her in that way too.”

Fellow friend and graphic design graduate Cody Peachey said some of his best memories of Schlegel were hanging out, and watching a marathon of “Star Wars” — which she’d never seen.

He added that she was also an “amazing designer.”

“When I heard they were doing this, I was excited,” Peachey said. “I think it’s something that’s a way to help friends and family get some closure.”

When asked how he thinks Schlegel would respond to the art gallery, he said, “She wouldn’t give herself the credit she deserved, but deep down she’d appreciate it, and it’s a really appropriate way to honor her memory.”

South Hills’ alumni and students are encouraged to submit artwork for consideration for the gallery. New pieces and collections will be added to the gallery throughout the year.