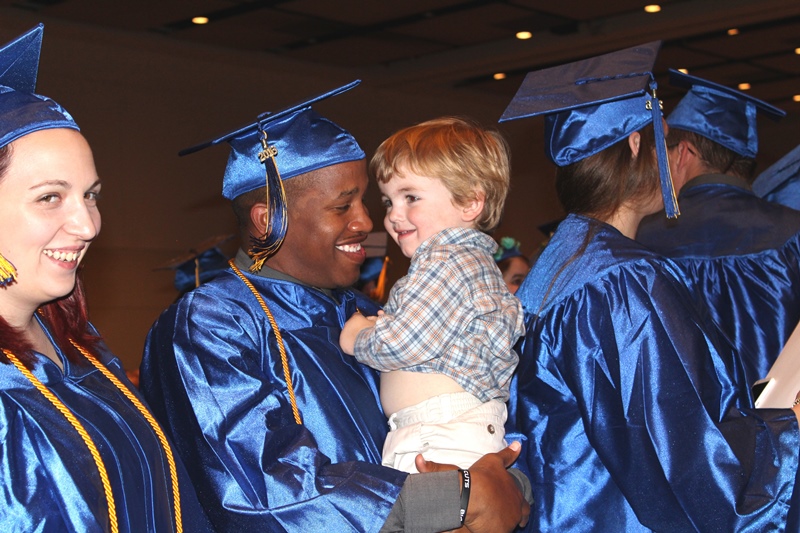 STATE COLLEGE — The large assembly hall at the Penn Stater Conference Center was filled with applause and cheers of congratulations on September 26 as South Hills School of Business & Technology held its commencement ceremony for the graduating Class of September 2016.

South Hills’ graduations are known to be given in a supportive and family-friendly atmosphere, as was evidenced at this year’s event. While singer and Class of 2016 graduate, Amanda Rider, stood at the podium to lead the national anthem, she was met with a surprise. Much to the delight of the audience, Rider’s 3-year-old daughter ran to the stage, where the mother-daughter team finished out the national anthem as a duet without missing a beat.

Words of challenge and encouragement were given to the graduates from keynote speaker, Kathy Stephens, a South Hills graduate from the Class of 1997 and Operations Manager for University Park Plaza Corporation in State College.

Following her in the line-up of special speakers, was Stephens’ niece, Kourtney Vermillion of Julian, Graphic Artist – Class of 2016, who gave a lighthearted rendering on the successes and rewards of attaining her degree at South Hills School.

Craig Ramage, Information Technology graduate of Hawk Run, was the recipient of this year’s Founder’s Award. This distinction is given to a graduating student who exemplifies the core values of South Hills’ founder, S. Paul Mazza: kindness to others, integrity, school involvement, and a strong academic standing.

Ramage was hired by The Raytheon Company, a technology and innovation leader, following his internship with that corporation in State College.

Receiving the JoAnn Bonfatto Memorial Award was Justin Vining, Criminal Justice major from Julian. This award recognized Vining as an outstanding graduate with enthusiasm, willingness to help others, dependability, and initiative throughout his time of study at South Hills.

Vining also secured employment directly through his summer internship. He works with the North Central Secure Treatment Unit in Danville as a Youth Developmental Aide.

In the article photo, graduate Sheldon Scott of State College gets a congratulatory hug from his young fan, Oliver Jacobs. Visit our Facebook page to view several more photos from the commencement ceremony.