The Kari Lynn Schlegel Memorial Gallery showcases works created by current South Hills students, alumni, and individuals who’ve completed Lifelong Learning courses at South Hills. The Schlegel Gallery features new and emerging artists as well as individuals who are already working or established in the field of design. All of the pieces shown were created using knowledge and skills gained through South Hills courses and programs.

Click the thumbnails to enlarge. New pieces and themed collections will be added to the Schlegel Gallery on an ongoing basis, so please visit this page often to view the latest additions.

Submit Your Artwork For Consideration
Gallery submissions of artwork created by current students and alumni of South Hills and students of our Lifelong Learning courses are accepted for consideration on a year-round basis. For more information about how to submit images, please email marketing@southhills.edu.
Trademark Usage Information
Student work shown in the Kari Lynn Schlegel Memorial Gallery was created in an educational environment for concept development purposes and is not to be used for commercial purposes. Trademarks, wordmarks, logos, and some product images remain the property of their respective owners and, when possible, are used with their permission. For more information, please contact us at marketing@southhills.edu. 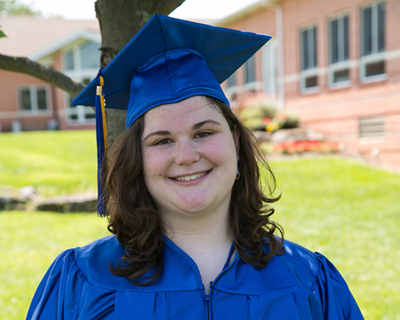 Kari Schlegel was born in March 1992 and graduated from South Hills in September 2012.

The Kari Lynn Schlegel Memorial Gallery is named in memory of Kari Schlegel, a lifelong Bellefonte resident and 2012 graduate of the Graphic Arts program at South Hills.

Kari was often the exclamation point in any story about the Class of 2012. Her effervescent good mood, enthusiasm, and seemingly endless supply of optimism and positive spirit was infusive, lighting up the classroom. 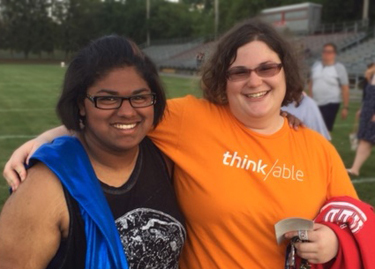 Kari (right) is shown with her beloved sister, Mindy.

Her classmates still laugh at the memory of Kari wearing her bunny slippers on the Graphic Arts field trip to New York City. Groan-worthy puns and jokes? Kari had a volume of them. She delighted in sharing stories and photos of her four beloved cats as well as trivia and tales of Harry Potter and Disney World. She was a rare combination of innocence, maturity, trust, and hope. She was filled with a joy of life and an unconditional love for her friends, her family, her pets… and people she just met. That was Kari Schlegel. 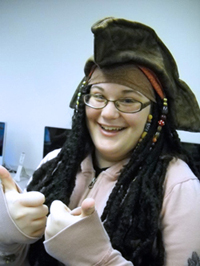 She loved her school, even coming back to audit several GA classes after graduating. Kari also particularly enjoyed returning to South Hills every summer to perform as part of the Music Picnic Series with the Bellefonte Community Band.

Kari died December 15, 2016, in a tragic automobile accident. It’s a loss everyone who knew her still feels. In the end, Kari truly lived her life with passion and joy, treating others as she wanted to be treated: with love, compassion, and respect.